I was given the book below by my brother-in-law’s wife for my birthday last year. It’s all about statistics. When I read the back cover & realized the subject matter I didn’t think I was going to get past the first five pages and thought I would put it down after that. 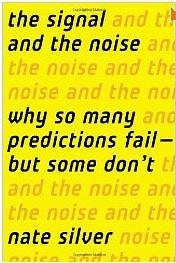 Well, turned out I couldn’t put it down… it was one of the most fascinating, well written, well-researched books I had read in a long time. The subject matter was just so engrossing! And it’s in use daily all around us, most commonly in predicting weather patterns but also in games like baseball and it has many other applications.

The main theme of the book is how to make better predictions by using “Bayes’s Theorem”, Thomas Bayes lived way back… he was born in 1701 & died in 1761 so has been around for a while but I don’t know how many people know about it.

The basis of his theorem is that one can improve predictions & probabilities based on newer events occurring. Let me give you a quick example from the book:

1. The unexpected underwear in the dresser drawer example.

You are living with a partner & come home from a business trip to discover a strange pair of underwear in your dresser drawer. You will probably ask yourself what is the probability that your partner is cheating on you? The “condition” is that you have found the underwear, the “hypothesis” you are interested in evaluating is the probability that you are being cheated on. Bayes’s Theorem, believe it or not, can give you an answer to this sort of question – provided that you know (or are willing to estimate) three quantities:

– First you need to estimate the probability of the underwear’s appearing “as a condition of the hypothesis being true” – that is, you are being cheated upon. Let’s assume for the sake of this problem that you are a woman and your partner is a man, and the underwear in question is a pair of panties. If he’s cheating on you, it’s certainly easy enough to imagine how the panties got there. Then again, even (and perhaps especially) if he is cheating on you, you might expect him to be more careful! Let’s say that the probability of the panties’ appearing conditional on his cheating on you, is 50 percent.

– Second, you need to estimate the probability of the underwear’s appearing “conditional upon the hypothesis being false”. If he isn’t cheating, are there some innocent explanations for how they got there? Sure, although not all of them are pleasant (they could be his panties). It could be that his luggage got mixed up. It could be that a platonic female friend of his, whom you trust, stayed over one night. The panties could be a gift to you that he forgot to wrap up. None of these theories is inherently untenable, although some verge on dog-ate-my-homework excuses. Collectively you put their probability at 5 percent.

– Third and most important, you need what Bayesians call a “prior probability”. What is the probability you would have assigned to him cheating on you before you found the underwear? Of course, it might be hard to be entirely objective about this now that the panties have made themselves known. (Ideally you establish you priors before you start to examine the evidence.) But sometimes, it is possible to estimate a number like this empirically. Studies have found, for instance, that about 4 percent of married partners cheat on their spouses in any given year, so we’ll set that as our prior.

If we’ve estimated these values, Bayes’s theorem can then be applied to establish aposterior possibility. This is the number that we’re interested in: how likely is it that we’re being cheated on, given that we’ve found the underwear? The calculation and the simple algebraic expression that yields it follows:

Well, if you’re still with me… well done! I’m going to start bringing this one in now…. don’t worry, it has to do with commercial real estate! 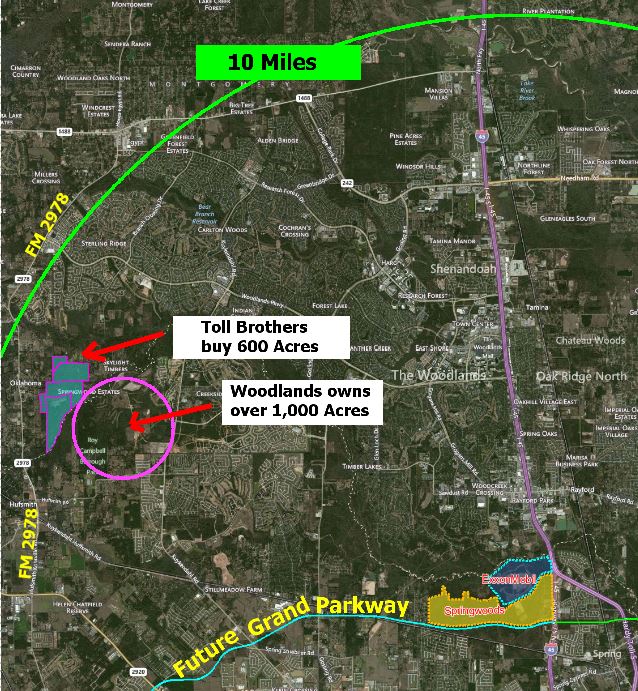 Image 2.
So, the big question always for an investor that’s buying land is this “Will it go up in value?”. Let’s see what’s happened historically… 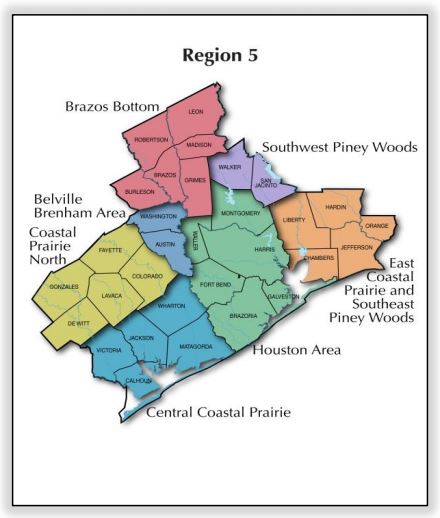 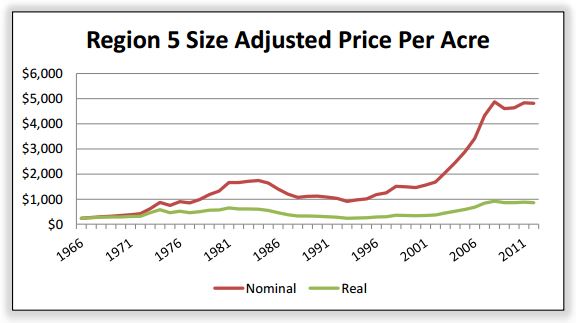 The red line in the chart at the bottom above is the “nominal” price of land per acre since 1966 and the green line is the inflation-adjusted “real” price per acre. In nominal & real pricing we’ve had a pretty good run since about 1996 but it’s tapered off a little in the last three or so years – as an average across a very large region. Having looked at the data, I would say that the chances of prices improving on a “nominal” level are at least 50/50 if you didn’t take any other factor into account.

Now, if we knew that a large company like ExxonMobil was going to bring 10,000 new employees to the area what would that do to land prices within a 10-mile radius of the ExxonMobil campus? I would estimate that ExxonMobil’s arrival would affect land prices positively about 70% of the time within that zone.

If ExxonMobil was not going to be arrive, our estimate at any “other than usual” effect on pricing would most likely be much less but still positive because the area within the 10-mile radius of the ExxonMobil location that is West of the I-45 contains The Woodlands and it is growing fast & has been an “engine for growth” for the area. So, probably an estimate of about 25% of the time a tract would appreciate above the normal rate.

So… once ExxonMobil decided to put in their campus, the chance of the price of a tract of land within 10 miles of that campus increasing in value was 73.7%.

But…. and here’s the interesting thing. The county appraisal values for land around Beltway 8 has increased faster than tracts of land not around Beltway 8 due to the improved access the beltway provides. Well, if you look at image 2 above you’ll notice that the “Future Grand Parkway” is coming through immediately below ExxonMobil. And, because we know from Beltway 8 history that land within range of the beltway increases faster than normal we have two factors driving pricing & probability of price increases.

So, the chances of land within 10 miles of the ExxonMobil campus and within reach of the Future Grand Parkway will have an 88.7% chance of increasing in value.

People and companies have been watching this area very closely…. this is why just a few weeks ago Toll Brothers, one of the biggest home builders in the country, just closed a purchase of approximately 600 Acres of land almost due West of the Creekside subdivision and just East of FM 2978. That 600 Acres is about a mile (as the crow flies) from about a 1,000 Acres that The Woodlands Development Corporation owns and which has not been developed yet.

We also know that FM 2978 has been scheduled to be widened to handle the high volume of traffic (which is only going to increase when Toll Brothers starts building!).

So…. using Bayes’ Theorem, we can run the expression for each major development or news item to see how subsequent events adjust the probability of price increases (or decreases if there’s bad news). In the case of the land within 10 Miles of ExxonMobil, to the West of the I-45 and to the North of the Grand Parkway, the prognosis for increases in prices per acre is extremely positive right now.

3. What are the biggest price drivers?

Ok… so we have an exciting way now to evaluate the potential for price appreciation but what types of “events” should we look at? Here are the big ones:
– population growth: this comes with job growth i.e. if big companies move into an are offering many new positions
– new roads or road widenings: land needs to have good access and good visibility to allow development
– big new developments: large land buys, new home subdivisions, large commercial developments

4. Which of these price drivers do we have locally?

So, what do we have in our area around The Woodlands that qualifies? Let’s take a look:

Any one of these events would usually be cause for celebration in a community… the combined effect of the events listed above is almost unprecedented growth plans happening now and underway.

So, the impact on the “Bayes’s Theorem”, where each subsequent event influences positively (in this case) the probability for future events causing an expected result, becomes self-perpetuating with all the major events we have happening around us.

…. some land we’re selling! Well, I am a broker so you should have expected this to end this way! 🙂

Well….. that’s it for now… hope you have a great week/month until the next time!

If you are interested in buying or selling land or even developing land, please get in touch – we should be able to help.